As a sound studies scholar, I am always looking for ways to bring sound into my classroom. I play recordings of wild birds, amphibians, and other animals for my students when we read early American authors writing about the “howling” wilderness, about dangerous adventures into the forest where goblins and witches seduce wandering souls into signing Satan’s book, and in the serene soundscapes of places like Walden Pond. Ambient sound recording is what I do in the Walden Soundscape, my ecocritical fieldwork project and digital nonhuman music box, but I want to come back to the human and bring early American social and cultural politics of listening into the classroom. 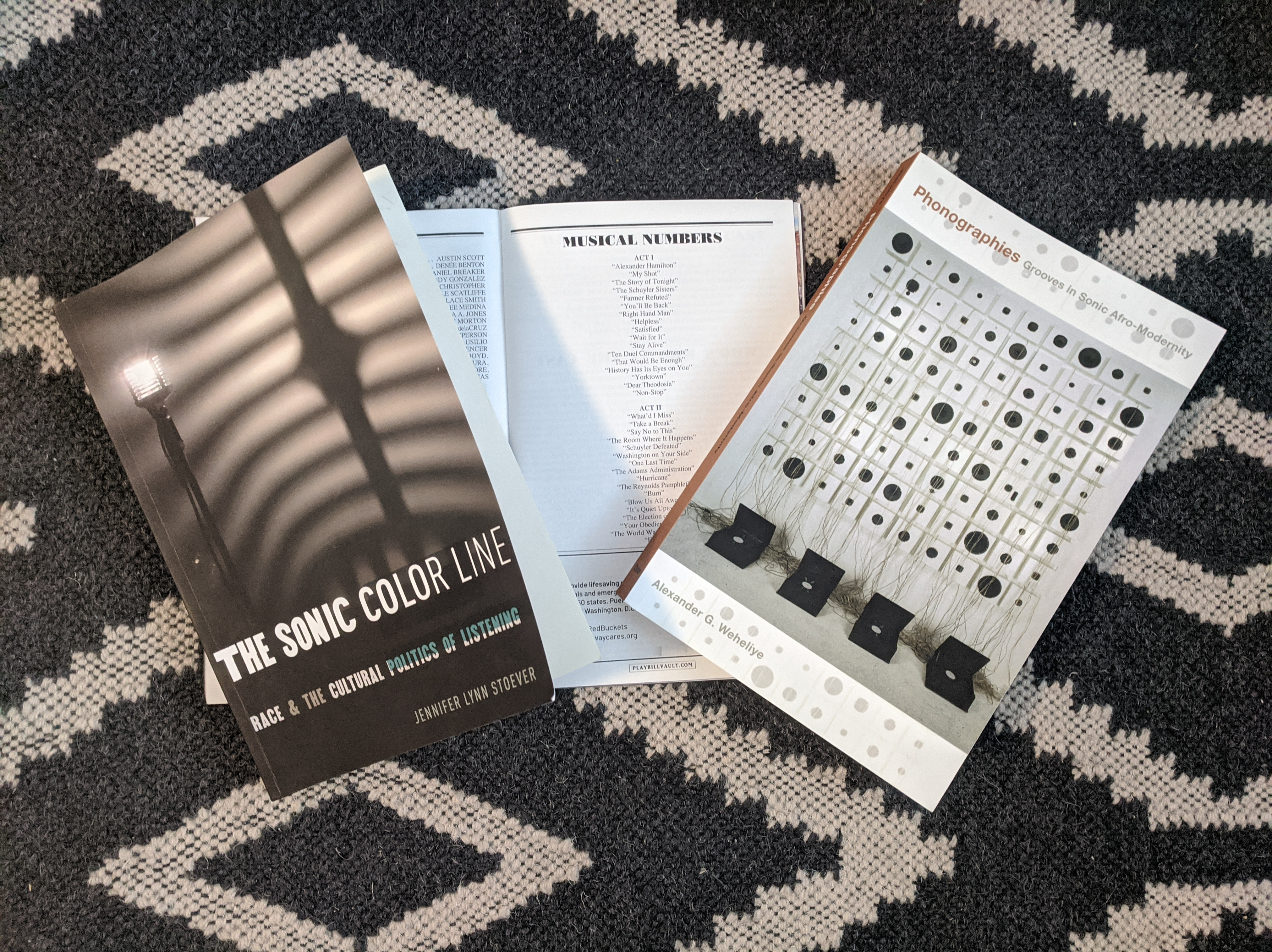 In particular, I want to develop students’ critical listening skills and call attention to the “listening ear,” a concept developed by Jenny Stoever (of Sounding Out!) in The Sonic Color Line. What do we hear when we listen to the past? Whose voices are considered valid and authentic in American storytelling, worthy of canonization and thus standardization in American education? The question of authenticity (and who gets to decide? or, in Audre Lorde’s words, “who pays what for speaking” in the first place?) is the territory of early American literature, especially when we discuss what African American writers had to do to get their stories told–the endless requests for proof and documentation, the stamp of approval from a white editor, and, inevitably, the subsequent discounting of those stories as in the case of narratives like Olaudah Equiano’s Interesting Narrative and Harriet Jacobs’ Incidents in the Life of a Slave Girl.

The listening ear, a privileged white ear and standardizing filter in the nineteenth century, in Stoever’s words, “more firmly interwove whiteness with Americanness, both normalizing the dyad at the heart of citizenship privilege and making it a visceral, tangible, lived experience at the level of auditory perception” (32). The inherent racism in nineteenth-century listening practices, beautifully articulated by Stoever, formed what she calls “the sonic color line,” which profoundly impacted the ability of black people to claim and sound their rights in American life. Indeed, the sonic color line still enacts violence against nonwhite embodied voices and beats today; the white listening ear characterizes nonwhite sounds as noise and nonwhite silences as an assault on white authority. Stoever opens her book with three accounts of “[w]illful white mishearings and auditory imaginings of blackness” (ix): Michael Dunn’s murder of Jordan Davis, Brian Encinia’s assault of Sandra Bland, and Ben Fields’ attack on a black high school student. Again, who the laws protect and how “we the people” is interpreted is the territory of early American history. As the editors of New York Times’ 1619 Project attest, “The rampant discrimination that black people continue to face across nearly every aspect of American life suggests that neither the framework of the Constitution nor the strenuous efforts of political leaders in the past and the present, both white and black, has yet been able to achieve the democratic ideals of the founding for all Americans.”

So how do we listen to the past when we have no sound recordings prior to late nineteenth-century inventions such as the phonograph? Could early Americans even hear themselves speak before inventions such as the telegraph and the telephone? They could to a degree, in the act of being physically present at the time of speaking, but the sounds were not repeatable, replayable, remixable except in written transcripts, performance reviews, literature, and the like. Alexander Weheliye’s Phonographies: Grooves in Sonic Afro-Modernity offers a wonderful example of how W.E.B. Du Bois mixes and scratches, like a DJ, spirituals, or Sorrow Songs, with the literary and the political in The Souls of Black Folk.

Lin-Manuel Miranda’s Hamilton, on Broadway and now firmly embedded in American popular culture from SNL to frequent references in mainstream media, offers a footbridge between early American history and today, albeit a problematic one with lots of creaky swinging rope and missing or rotting wooden planks (because reasons–don’t throw tomatoes at me yet!). On the one hand, as Talib Kweli points out, it brings Broadway and hip-hop together. In an interview with Vulture, Kweli said, “It’s a musical that’s greatly influenced by hip-hop, and the hip-hop influence on it is wonderful.” According to the interview, Kweli shows admiration for Hamilton‘s thoughtful cast, which includes actors well-versed (no pun intended) in both hip-hop and traditional Broadway.

On the other hand, Hamilton downplays the cognitive dissonance that characterized the Federalist period: many of the nation’s heroic white figures owned slaves while fighting for liberty. Some historians, like Miranda, have used a historic figure’s abolitionism to uphold an icon at the expense of realism. George Washington, for example, is allowed to be the towering emblem of honest justice despite the fact that he was a slave owner (if that’s hard to hear, read this). Yes, casting traditionally marginalized POC as the white founding fathers has given actors such as Daveed Diggs a sense of ownership over American history. Seeing brown bodies play Thomas Jefferson and the Marquis de Lafayette is an important step forward in moving the needle to cast more POC in leading roles on stage and on screen. Similarly, it is important to me as an educator and early American scholar to show my students, who are predominantly nonwhite, representations of themselves in American literary history so they can find their own origin stories in their country’s past.

However, the play’s content upholds national mythology and doesn’t tackle both sides of the veil equally (see Du Bois’ The Souls of Black Folk). I am by no means the first to say this. As historian Lyra Monteiro has said, “It’s still white history” and Helen Shaw felt actual sadness about “the way the show sounded” [emphasis mine]. The play uses a progressive casting strategy and appropriates what Nina Sun Eidsheim terms “sonic blackness” only to ignore, in its content, the long history of injustice and oppression of black people that began with 250 years of slavery followed by over a century of second-class citizenship and what the 1619 Project editors rightly call white-supremacist terrorism. That silence perpetuates centuries of violence against African Americans, mimicking the problem of what will forever be unheard and unspoken in the American canon and American historical records (see Saidiya Hartman).

It is a chic and fun idea to teach Hamilton in the early American literature survey but I also want to bake critical listening into an assignment about the play. Following Hartman’s purpose to envision “a free state” as the future of her writing in “Venus in Two Acts,” I want an assignment that listens for a free state. To do that, we must listen “for the unsaid” between the lines of “terrible utterances” (Hartman 2-3) in American literature, in the Federalist papers, and in the poetry of Hamilton.

Kashema Hutchinson, a doctoral candidate in Urban Education at the CUNY Graduate Center and my colleague at the Futures Initiative, brought CUNY undergraduates together from three different campuses–City College, LaGuardia Community College, and John Jay College–for a cypher, a hip-hop cultural event that addressed the intersections of teaching and learning and hip-hop, in February 2019. Moderated by Hutchinson, the hip-hop pedagogy master, the event touched on everything from hip-hop artists who rap about school to the importance of meeting students where they are. In New York City, where hip-hop was born and raised to the art form it is today, hip-hop provides a poetic medium for doing just that. The good, the bad, and the ugly rapping in Hamilton, with all of its problems, is one way to bring hip-hop pedagogy into the early American literature survey. 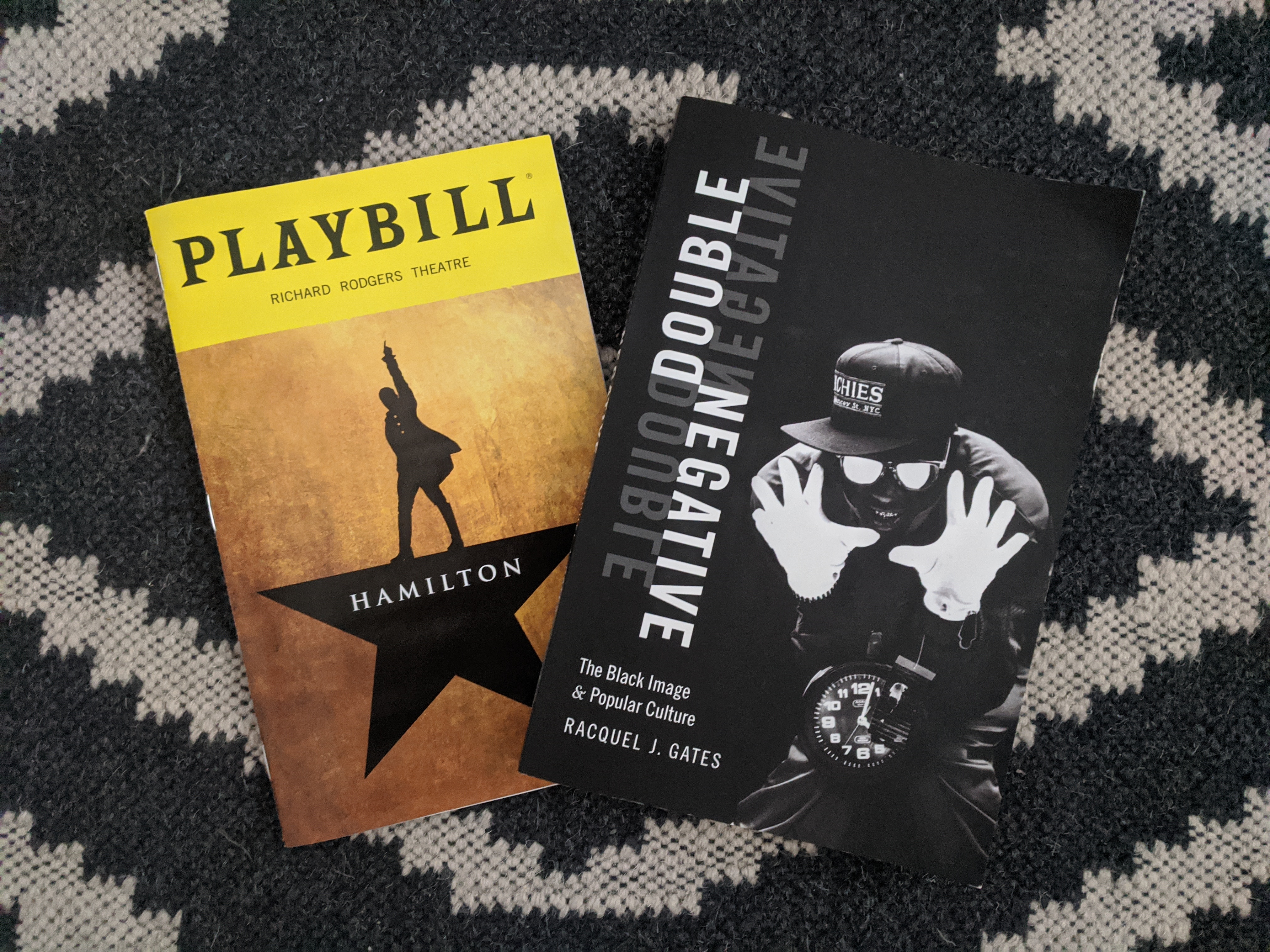 There are ample resources out there for teaching Hamilton in humanities classes (see Teaching History with Hamilton, Rise Up!, and Hamilton’s America, to name a few). My focus, however, is to take a comparative approach to literary studies, beginning with the original source documents and historical context (drawing from my training in American Studies) and ending with Hamilton as a contemporary work of literature and music. This assignment asks students to listen to Hamilton‘s soundtrack, songs they find from the early American period as well as their hip-hop artist of choice to hear the sonic genealogy of the American literary and cultural present.

Considering both the cultural context of Alexander Hamilton’s time and our time now, write a paper that draws from lines from Hamilton as well as lines from a current hip-hop artist to address one of the following questions. In addition to addressing one of the bullet points below, your paper must include: one close reading of a direct quotation from Hamilton and/or one close reading of a historical text that we read for class; and use two scholarly resources to support your argument (you may use any of the articles or book chapters we have read together in class). You must do at least all three of these things in order to earn a grade of “A.”

CUNY is preparing to sign a $2M contract with Turnitin.

@lmrhody @RoxanneShirazi and I have prepared detailed testimony to the Board of Trustees expressing opposition.

@CUNY folks please consider signing on to the statement:

"...stress among faculty has been increasing since the summer, back up to the levels experienced at the onset of COVID last March. In fact, one in four faculty said their stress levels are highest now than any other time in the last 10 months." PREACH. https://www.fierceeducation.com/administration/faculty-burnout-virtual-teaching-taking-its-toll-as-covid-rages?mkt_tok=eyJpIjoiT1Rsak1qSTNNVFEzWWpZeSIsInQiOiJKZitFUnorcFJBRkREZUdyMFpJSXdoOXg1TlRmQlc2N3gyS3lmdkxKN2pEaHN2V2FuVjZVT3lRU3hBb05CSWZpQVVJZ2tYNmlZRkxWWU5UWTlhUitscDZLMGNHUElQZUM3Vkppa256UXdXeEt0N2oxalB4akhvSzhnOGt1XC81ZVd3Z21XTWx2dk1hZHhHcm1Zd3V2dHRRPT0ifQ%3D%3D&mrkid=131527224

"...stress among faculty has been increasing since the summer, back up to the levels experienced at the onset of COVID last March. In fact, one in four faculty said their stress levels are highest now than any other time in the last 10 months." PREACH. https://www.fierceeducation.com/administration/faculty-burnout-virtual-teaching-taking-its-toll-as-covid-rages?mkt_tok=eyJpIjoiT1Rsak1qSTNNVFEzWWpZeSIsInQiOiJKZitFUnorcFJBRkREZUdyMFpJSXdoOXg1TlRmQlc2N3gyS3lmdkxKN2pEaHN2V2FuVjZVT3lRU3hBb05CSWZpQVVJZ2tYNmlZRkxWWU5UWTlhUitscDZLMGNHUElQZUM3Vkppa256UXdXeEt0N2oxalB4akhvSzhnOGt1XC81ZVd3Z21XTWx2dk1hZHhHcm1Zd3V2dHRRPT0ifQ%3D%3D&mrkid=131527224

Dear #AcademicTwitter ...Along w @nemersonian, we're interested in connecting with progressive, active learning advocates in higher ed outside US and Canada. Any ideas of best networks, associations for us to contact? Thanks in advance!