A Story for the Frustrated English Composition Student

This is a story for the frustrated College Writing student, the slow reader, the one who thinks she’s bad at writing because she ever struggles and is discouraged.

I grew up loving the arroz con pollo my au pair made for me in our tiny house in Miami, Florida. Irene, or “Ree-nee,” as I called her, was from Peru and I spent most of my time until I was 5 years old with her, asking her for uvas, watching Zorro save damsels in distress together, and getting free cookies at the Publix bakery. I wish I had a picture of her to show you because she was the most loving and wonderful person in the world, but most of that stuff got lost in the hurricane (Andrew of 1992) and I wasn’t with her again before she passed away. A poor substitute, here’s exhibit A: me with the blonde hair I would eventually grow out of, smiling and full of potential because I lived in a world that spoke both English and Spanish.

Then my mother moved us and the two cats to a small town in New Hampshire, where no one spoke Spanish, no one knew about the great deeds of Zorro, and everything–and everyone–was all rigid with cold. I went crazy, absolutely loca. No one understood me because everything in my heart was illegible in the quiet town where everyone looked the same, and I looked like everyone else, except I was an outsider, my mother worked, and she and I had different last names once she got remarried.

I learned my letters obediently, but I hated reading. It was boring, it was difficult, and I was awful at it. If you had told my mother that I would one day become a doctoral candidate in English and teach college writing she would have laughed in your face. I bet my teachers would have, too.

They put me in a special class in 2nd grade where we did Hooked on Phonics. I loved getting to go to a different room than all the other kids, thought I was special, and was relieved to get out of the hard reading with the rest of the class. That’s when I learned that “th”, “sh”, and “ch” were pronounced differently in English. I remember that lesson so well because it was the key to everything. Before I had thought they were all the same, and the “th” sound doesn’t exist in Spanish so how could I have heard the difference? Yeah, Hooked on Phonics worked for me.

My mom told me that after that I was reading at the 5th grade level, and then I got to 5th grade and she was still reading to me because I hated it. I was slow. I was bored. Who in their right mind would spend time reading? Why read books? Little did I know that this is a cultural thing. Later, when I traveled to a tiny village in Panama to teach kids English as a second language, I would encounter the same attitude. Sometimes I still hate reading–but can you blame me? Who really wants to sift through academic jargon on a beautiful Spring day?

My 5th grade teacher tried everything. Babysitters Club books were the worst that she tried on me. Then when she found out my mom was still reading to me, she flipped. I asked her if I could read Wuthering Heights and she said it’d be too hard for me. I cannot explain the rage I felt when she said I couldn’t do it. I was as stubborn as ever but I wouldn’t prove her wrong until much later. 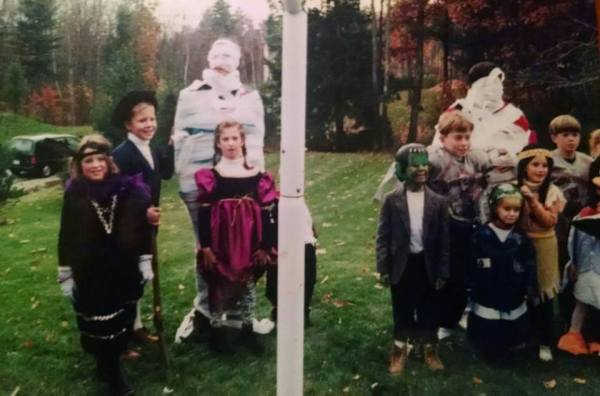 Then I found Goosebumps, and in the end R. L. Stine saved me. Why Goosebumps out of all possible book series? Because I’m the biggest scaredy-cat ever. See exhibit B: me in a little fuchsia Rapunzel dress and pigtails on Halloween, waiting to be saved by Zorro. That’s what you get when you move a kid from Miami to New Hampshire. I don’t even know where my feminism came from. I stayed far away from zombies and wore that costume every Halloween for four years. When it came to Goosebumps books, I had to finish them to know that everyone turned out all right, otherwise I couldn’t fall asleep. I’d be terrified the whole time, but I was a purist, too, not wanting to skip to the end. And then all things in the universe would be put right and I could sleep. Twisted, I know.

After that I found myself enamored with Agatha Christie and Edgar Allan Poe. I wrote my first research paper in high school on Poe as a necrophiliac. I was also depressed as hell, even after I had started to make friends. I took Spanish classes and was able to pronounce anything thrown my way but the rote memorization of vocabulary nearly killed me. I was bad at that, too, but I loved learning Spanish and Latin American history, about famous painters, Moorish architecture, and indigenous cultures. I soaked it up and got used to being embarrassed by my own incapacity to remember words and their meanings.

When I finally made it to college–un milagro–I knew I wanted to major in English despite myself. I liked Ernest Hemingway because I could understand him and because he taught me about subtext. I liked William Blake because his poetry and drawings were so beautiful and also easy for me to “get.” He taught me that childhood is a time of innocence, and I began to characterize mine as one of experience.

But the papers were a struggle. I’m lucky I passed College Writing. Almost none of it stuck, which was partly my fault and partly my teacher’s. I scraped by that first year as Oscar Wilde’s The Picture of Dorian Gray became the bane of my existence.

In my second year, I got lucky. I’ll never forget Michelle, my teacher for Brit Lit 2. She made the mistake of telling us we could revise any paper for a better grade. When I got a “B” on my paper on William Wordsworth’s poem “Mutability,” I decided that if I wanted to be an English major–maybe even a professor, one day–that I needed to get an “A” on every paper.

Mastering the college paper was my mountain, and I was Sisyphus. Michelle patiently met with me in her office and explained that saying something was “interesting” was not the same as making an argument. If only I had known about PIE paragraphs then. Luckily, I was learning about something called “topics of discussion” in another class. Most of my papers were regurgitations of what my professors had said, and my best practice with thesis statements had been with DBQ essays in U.S. History in high school.

In the end, Michelle had me write that paper five times. Every time I would email her a new draft, all happy and excited that it was finally done, that I had finally gotten it right, I would find at the end of her response the dreaded statement: “I look forward to your next draft.” Those words are incinerated into my memory, as is every word of that beautiful damn poem. But instead of loathing Wordsworth, my love for him just grew and grew. Romanticism was the light at the end of the tunnel, and Michelle walked with me the whole way. She was the kind of teacher that I wanted to be…

Now, after a long and rocky road, I know that no one actually thinks left-to-right and top-to-bottom. I struggle every day as I write my dissertation, writing my way to a thesis and then having to go back to rewrite every topic sentence to reflect the discovery I made. A friend in my dissertation workshop said she envied the mosaic structure of my chapter, and I thanked her, rather befuddled that anyone would think such a thing, because I envy the clear and purposeful linear structure of her writing. The grass is always greener, as they say, but writing is a struggle for everybody.

Writing is a process, slow and grueling, of self-discovery, of finding one’s voice, getting to know how one thinks, and conforming that moving stream to the prescriptive forms of one’s practice. That blank page looks to me more like a blank canvas. I think that’s why I love staring at paintings by Jackson Pollack. There’s a hidden rage that I identify with in the smatterings across the canvas, a resistance to conforming to aesthetically-trained eyes that demand a linear logic in a world in which I think linear logic makes no sense at all. Every language originates in a different worldview, a different way of loving and relating to others, and a different way of reasoning through problems.

So to the frustrated student, revising that paper yet again for your College Writing class, I say this: Although this seems like the road well-traveled by others, what lies ahead of you is a different road, one that only you can walk, and persistence makes all the difference. College is the time to find your voice and distinguish it from those of your parents and teachers. So buena suerte, and have faith that your writing voice will come out in good time.

0 Replies to “A Story for the Frustrated English Composition Student”