I’m a 19th-century Americanist and my syllabi for courses taught in early American lit have covered a wide span of women’s literature. I’ve always gone for non-canonical authors and approaches that critique a male-dominated, colonialist canon. But aside from teaching the usual suspects, slave narratives such as Harriet Jacobs’ Incidents in the Life of a Slave Girl, poetry by Phillis Wheatley, Harriet Wilson’s Our Nig, and a small selection of Native American authors such as Zitkála-Šá, my syllabi have been shamefully white. I’ve told myself that it was because I was only allowed to teach up to 1865 or 1899, depending on the course. But when there’s so much literature that references back to the 19th century, I think it’s time to say that that’s not a good enough reason. The course is called “Gender in the American Renaissance,” so it feels natural to talk about the Harlem Renaissance…and why stop there? 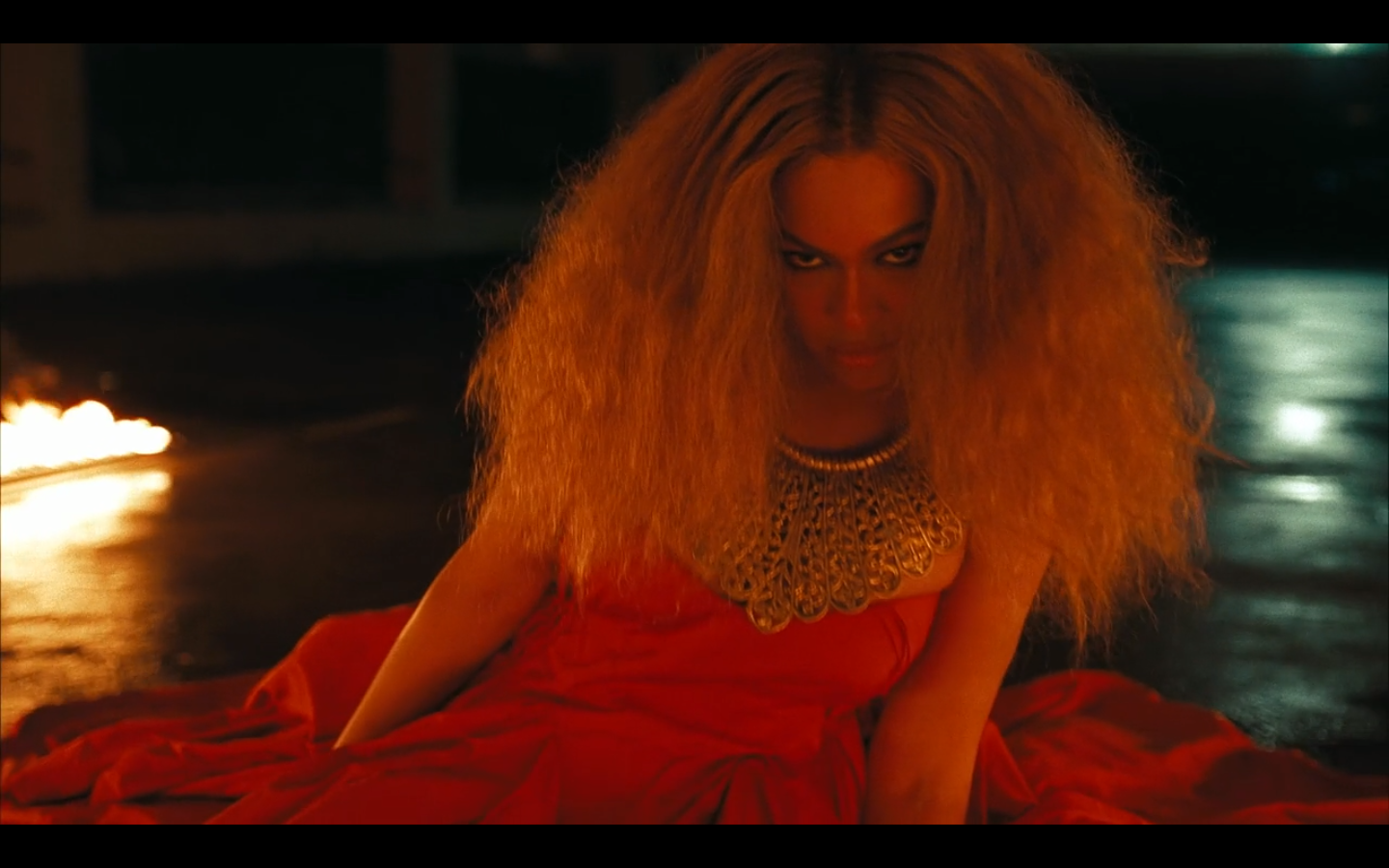 What I love about LEMONADE, as a teacher, is its deep references to the Atlantic slave trade, to inherited violence against women, and its reclamation of black womanhood. I also love its display of black beauty, visual references to Daughters of the Dust, that the poetic narrative and bodies on the screen never pull the rug out from under women of color, and so much more. But the first three things–the Atlantic slave trade, inheritance, and black womanhood–are what make a very compelling argument for teaching it as part of my Advanced Topics in 19th-Century Literature course.

Just a handful of the references to the 19th Century include: a visual reference to the holding place for slaves in Ghana; white dresses and Victorian clothing; forced concubinage, rape, and pimping; objects of torture (ropes, chairs); the bondage of black women who, at sea, threw themselves overboard; the conversion of West Africans to Christianity; and Nat Turner’s rebellion. There’s a wealth of references I’m leaving out and it is great to get your students to try to find more and make connections to art and literature.

Staring at my syllabus in August, I decided that works that reference back to the 19th century were close enough. That way I could bring in more women of color authors and stories that reimagine the 19th century like Octavia Butler’s Kindred. Following Roxane Gay’s argument in “I Don’t Want to Watch Slavery Fan Fiction,” I wanted to offer more than the same Civil War story and tackle the elusive Reconstruction period and racism in the North that many teachers tend to gloss over. I also wanted to not just think about the past but facilitate imagining a different future–slave narratives are not the only stories nonwhite women authors tell.

The complication was that I needed to leave room for my students to choose some of the texts themselves. This is partly how I decolonize the classroom: I ask for student input on the syllabus–and they always come up with great things. This time they surprised me by adding Milton and Hawthorne to an otherwise all-women reading list. They exchanged Jacobs’s Incidents for Wilson’s Our Nig and Zora Neale Hurston’s Their Eyes Were Watching God. Our Nig is firmly situated in the 19th century and Hurston’s narrative is shaped by an inheritance of rape and abuse so it fit as our pivot point into the 20th Century. Even if students had read it before, it was a great choice because they had likely never read it in this context. That’s what they picked.

Because of these choices, we wound up with an amazing critique of the Angel in the House stereotype, which neither Our Nig nor Their Eyes contains. Both decidedly do not use that master’s tool to dismantle the master’s house and the absence of the angel figure says volumes about what kind of hell Frado and Janie live in.

I picked Audre Lorde’s “Poetry is not a Luxury” to go with Frances Ellen Watkins Harper’s “The Slave Mother” and “On Being Brought from Africa to America” by  Wheatley. I also picked the first two chapters of bell hooks’ ain’t i a woman and we played a video of Kerry Williams performing Sojourner Truth’s “ain’t i a woman” speech. We read Sarah Grimke’s “Letters on the Equality of the Sexes,” but Letters V, VI, and VIII, which are about women in Asia and Africa as well as women in the United States. And I picked LEMONADE, hooks’ critique of Beyoncé, and Octavia Butler’s Kindred to round out the semester. Here’s the full syllabus.

How it changed the course

While many of my students are ambivalent about Beyoncé, torn between the impulse to love her and either a projection of jealousy or disdain for capitalism, LEMONADE is raw and personal and beautiful and when we watch a segment, discuss it, watch a segment, discuss it, slowly moving through it, their critical eyes and ears start reading the video through the words of Jacobs, Wilson, Hurston, hooks, Lorde, and Queen B herself.

LEMONADE inspired my desire to understand how women have experienced the complicated world that violently evolved between Jacobs’ time and Beyoncé’s. I’m not a 20th-century lit scholar, but this interest shaped the syllabus and it ended up being what my students were most interested in: they always want to know, to some degree, “how does this relate to me now?” I always want to know how something is relevant–dig into the “so what” of a “historical” text and find what it might tell us today.

The readings before LEMONADE helped us get to present day. hooks’ first two chapters of ain’t i a woman beautifully put the devaluation of black womanhood in the antebellum and Reconstruction periods into words. Then living vicariously through Wilson’s Frado and Hurston’s Janie gives shape to pain, triumph, and defeat in a world built without a supportive net to catch a heroine when she falls (unlike the stories written by white women authors in the 19th century).

By the time we got to Beyoncé, we were already having extensive conversations about parallels between the 19th century and today regarding natural hair, interracial relationships, misogyny, the tug of war between political activism and literature and art. Now that we’re here, watching LEMONADE, what I’m noticing is that my students are more sensitive when listening and speaking to each other and the voices in the room seem to be more balanced than they have been in previous classes. LEMONADE references recent police brutality and severely under-covered stories about black girls and women, while it also brings so much history into the present, through visuals and the voice of Malcolm X, and it was perfect for helping students see the 19th century in the problems we face today.

I am hyper aware of my authority in a classroom, constantly trying to give more authority to students but also conscious of how students nevertheless may distrust me due to my whiteness, and that I may fumble as a result. But denying my students wider access to nonwhite literature would be worse than trying to teach it in a decolonized classroom, even if I mess it up, as long as I’m willing to admit the mistake and be comfortable with being wrong, following the guidance of amazing authors like Lorde, hooks, and Gay. My students will learn more from them than they will from me.

But as a teacher I cannot help the fact that I exercise authority by making decisions regarding course content. So, after hooks’ critique of Beyoncé’s LEMONADE in all of its capitalist glory, why do I still teach it? I see LEMONADE as telling a similar story to ain’t i a woman in a different way, and while that story is certainly not made for me or for my consumption, because my views are shaped by Lorde and Gay, I do think that story is ready to be reborn into something new.

I’m proud to bring something so visually and poetically complex into my classroom. It doesn’t shake things up; rather, it confirms, validates, rectifies, and reshapes many things my students already feel to be true. As my phone alerts me to more articles about Jay-Z’s recent interview revealing his infidelity, I hope that the public fascination with him as a male actant doesn’t end up overshadowing the beauty and import of Beyoncé’s art.

.@EllyWeybright presents her paper on women musicians in the archive at #mla2021

Congratulations to the newly elected Advisory Board and officers of the Margaret Fuller Society! https://margaretfullersociety.org/about/