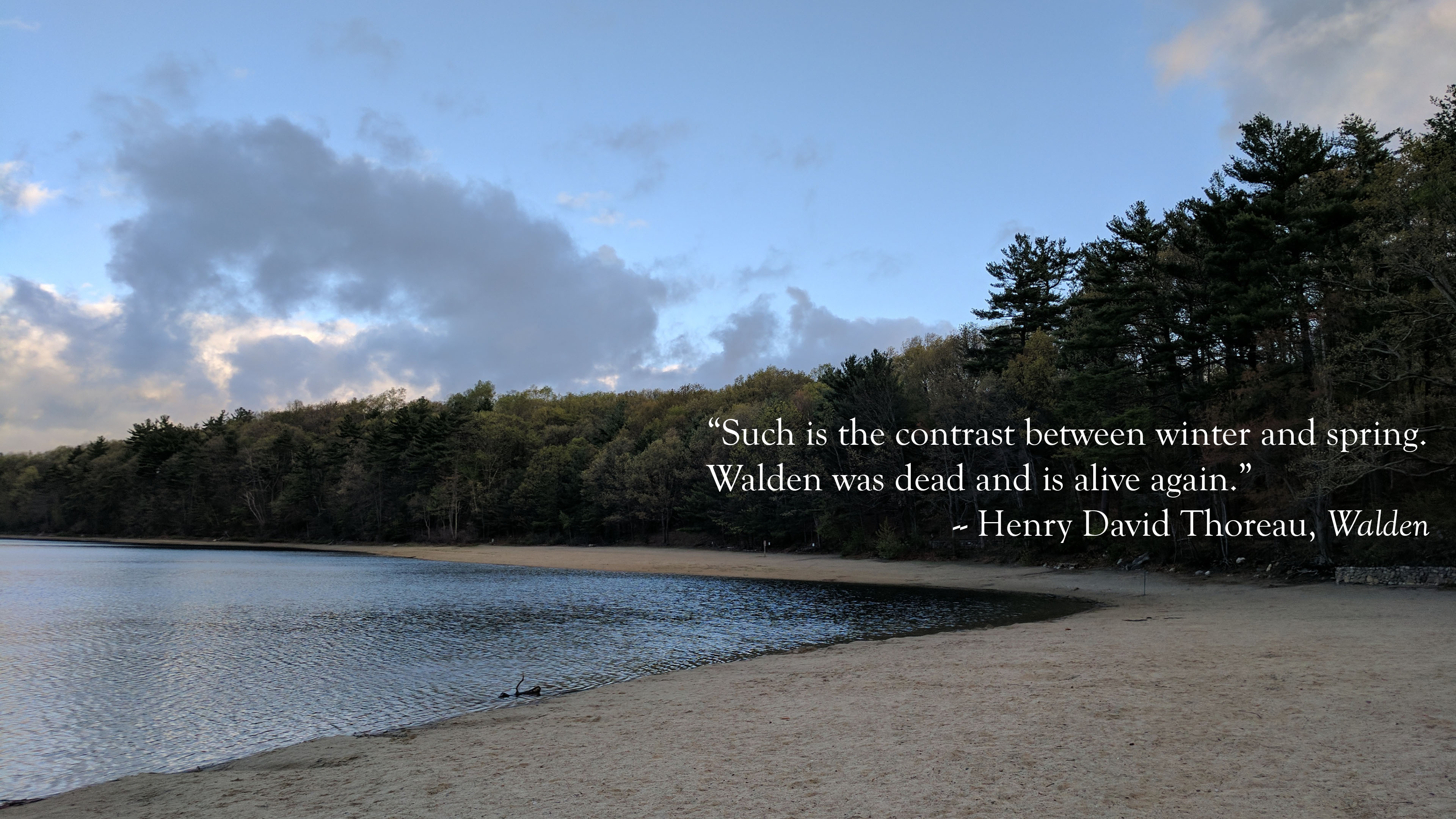 In the first week of May, a Walden park ranger confirmed over the phone that the birds had arrived and there were leaves on the trees. Ready to collect my next sound recordings for The Walden Soundscape project as soon as spring arrived in New York City where I live, I had been asking the rangers whether or not spring had “sprung” yet at the pond (Concord is approx. 200 miles north of New York City, delaying the arrival of spring by several weeks). 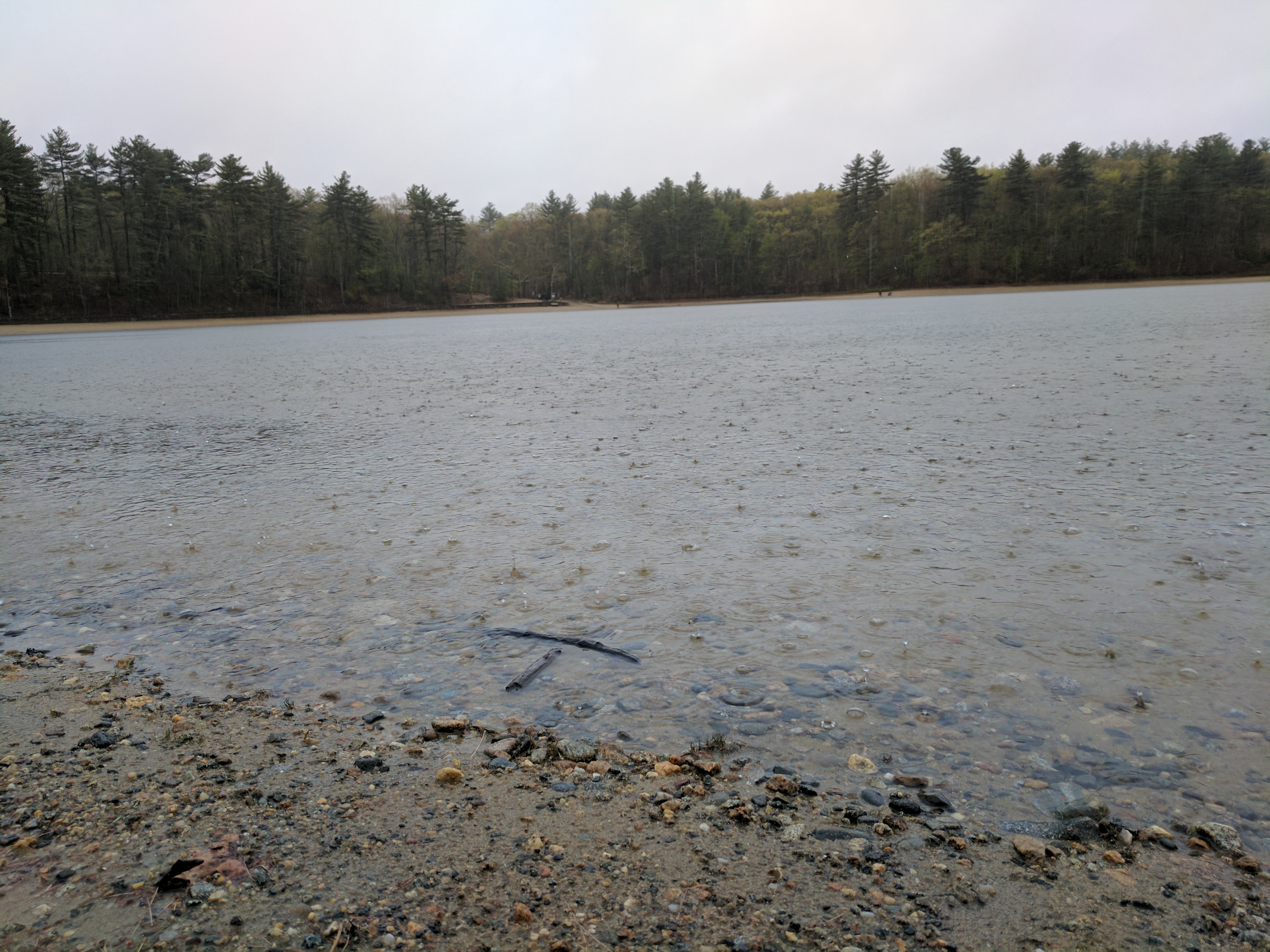 Despite the pouring rain you read about in my last post, I set out on Friday for the pond hoping the clouds would clear in the afternoon. I sat in a camping chair clutching an umbrella over my equipment, just listening to the rain. The sound of the drops hitting my green umbrella interfered with recording the sound of drops landing on the pond itself, and when I closed the umbrella the sound of raindrops falling on the mic also interfered. I took a break from recording that day and the next (it poured most of Saturday, too) and I set my alarm on Saturday night for 3:50am to get to the pond at sunrise, but at 5:00am the birds had already started.

I was able to photograph the 1.7 miles of the path around the pond, and you’ll see glimpses of puddles on the path in the video. Unlike the vertical photos I took for the winter walk, horizontal photos captured more of the pond in the frames as well as the early green coming in at the sides of the trail. Sunrise and sunset are really the best times for taking photos because you get the most dramatic shadows. But next time I’ll have to get there well before sunrise to get the full dawn chorus!

The best part in the walk, which starts on the east side of the pond and moves west, was stepping out of the blue shadows and into the bright warm colors of the sun hitting the westernmost part of the trail. Seasons were extremely important to Thoreau, and creating these virtual walks for all four seasons fits into the broader themes discussed in Walden. Two of these key themes are the regular migration of birds throughout the year, and the unique differences between New England seasons. This time I was able to collect the sounds of geese landing on the pond during their migration north. Every visit is different. Overall one of the greatest challenges of this project was being flexible and becoming acutely attuned to natural fluctuations in weather, like Thoreau was.

The Walden Soundscape project is funded by a Provost Digital Innovation Start-Up Grant (PDiG) and the New Media Lab (NML) at The Graduate Center, CUNY. Responding to the “sonic boom” of Sound Studies in the humanities, this website takes a new approach to literary analysis by advocating for “listening” to the soundscape of a text and to the environment in which it was written–both are critical to understanding a text’s meaning. To read the white paper report on project progress in 2016-2017, click here.

(she/her) Works at @TLH_CUNY. Americanist, Environmentalist, Feminist, Sound Recorder, Podcaster, PhD in English from @GC_CUNY. Opinions are my own.

"If we can imagine a post-pandemic campus that nurtures rather than fatigues, we can begin to make such campuses our future." Check out this wonderful piece from @nrhelms @caitskirby & @AsiaMerrill4

Transformative Learning in the Humanities@TLH_CUNY·
25 Jan

RSVP today for a two-part Anti-Racist Pedagogy Workshop by Felicia Rose Chavez, author of The Anti-Racist Writing Workshop! These are virtual, free events open to all of @CUNY and beyond this February! #TransformCUNY #creativewriting #pedagogy https://www.eventbrite.com/e/adapting-our-teaching-habits-with-felicia-rose-chavez-tickets-231047548437

I've got students apologizing for getting covid, despite despite despite. I fear that what they're learning from these brutal years is to take individual responsibility for structural failures.

"Why we stopped grading our students on their writing" - a must read! And the lovely collection @SusanDebraBlum edited is featuted within: https://wbur.fm/3JXOfFD via @cogwbur

McSweeney's just gets it. https://www.mcsweeneys.net/articles/how-we-will-separate-you-from-any-lingering-hope-and-other-important-topics-of-todays-faculty-meeting?fbclid=IwAR3nkuTIjm216fCCdFXMLPeoezSZcRjl_Qz9pQmGePm_JL_I0igkndYf6nc