When I greeted my students on the first day of the semester with the announcement that technology would play a large role in my “American Literature: Origins to the Civil War” class, I’m pretty sure their faces looked something like this:

Admittedly, it made many of them anxious when I began explaining class blog post assignments using WordPress, which I had done in my previous ENG 395 class, and my expectations for live-tweet discussions using Twitter, which I had used before to teach close reading skills. I asked them to not only create profiles for both platforms but to also create a GoogleDrive folder to share their work with me and then I invited them to the class DropBox which houses my grading rubrics, and their assignments and secondary readings. The first day of school is always overwhelming, and a few dropped the class, but that’s normal. The students who stayed in it for the semester totaled at 27, only three below the maximum of 30. So digital media didn’t scare them away even if it scared them.

In this post I’ll talk about Twitter literacy, digital pedagogy assignments, student attention and engagement, the community Twitter fostered both inside and outside of the classroom, and how Twitter made me more available to my students. I’ve incorporated the results of a recent survey I took in the class, and student perspectives on using Twitter in the classroom to help you decide if it’s right for you. If you want the short version: Twitter is an incredibly useful tool for decolonizing the classroom and empowering students, and there are many pedagogical benefits for students and teachers alike. It’s also allowed me to showcase outstanding student work. If you’d like to view more student tweets, or participate in our digital community, follow the hashtag #AmLitEnv.

In the first week, I walked students through creating a profile on Twitter and showed them mine as an example. I invited them to follow me and showed them what other teachers and students were doing with Twitter. 66.7% of students did not have a Twitter account before my class. Several chose the option to create a professional Twitter account linked to their identities that they might use in the future. Others chose to create “discard” accounts that would in no way identify them and that they would only use for my class. This was an idea inspired by Chuck Rybak’s Tweeting Class Discussions Assignment and Notes. It’s amazing. You should check out Rybak’s work with his students! Whatever students chose to do, I gave them detailed advice about tweeting and building a public profile that would serve them well. This infographic was particularly useful:

The introduction to Twitter–and WordPress, too–opened up the discussion to the utility of literacy and how far an English major in college could go in the adult world. I openly discussed my post-college work in a Communications Department for a nonprofit: my introduction to Twitter happened when I took on the role of promoting the organization across various social media platforms. I knew how to read and write, and I knew how to build a coherent, unifying message. These were the marketable skills any English major with a B.A. could use to find a job–and they still are. Most students found their time with Twitter in my class useful for future professionalization (74.1%).

For a survey course about American Literature, it didn’t seem appropriate to spend any more time on the technology, but I would recommend spending at least 30 minutes helping students navigate the technology (I only spent 15-20 minutes on this). Showing them how to tweet, like, and re-tweet things for just another ten minutes could make all the difference down the road.

Regarding the latter (students live-tweeting class discussion then sharing their tweets on Storify as class notes), 55.6% of students found that the assignment mostly helped them remain engaged and attentive throughout class. 14.8% found Twitter was most helpful for formulating discussion questions. We also translated some of their discussion questions on Twitter into productive thesis questions for their upcoming research papers. 18.5% found this the most helpful use of Twitter.

Some felt that live-tweeting was distracting (those who did couldn’t resist checking other messages) while others found it helped them pay more attention and listen to each other. I had put them into groups of four to split up live-tweeting responsibilities, and only asked them to tweet (as a group) a total of four times per class period. During a 75-minute class period, this allowed Twitter to become a useful resource without taking over class discussion entirely. Here are some student tweets that I responded to after class:

The most helpful assignment using Twitter seemed to be my method for taking attendance by asking each individual student to post a discussion question in the first five minutes of class. I encouraged them to form the question in advance so it would be easy to post the tweet and begin, but not all did this. Following a student’s suggestion, one day I required that they also reply to a peer’s tweeted question. This can be difficult to trace with a class hashtag because they run out of characters quickly. Here’s what students said: 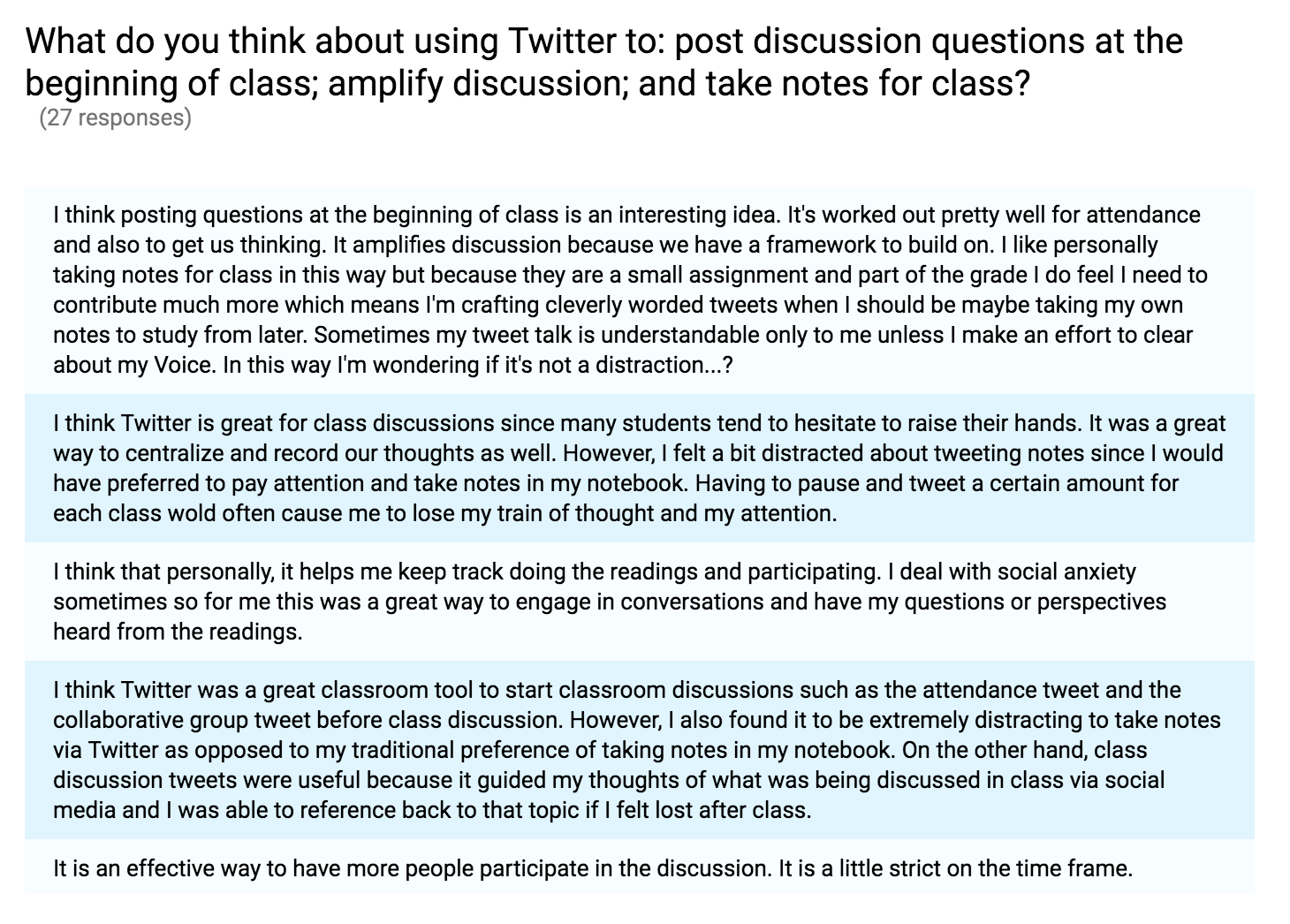 I was surprised that a few thought the live-tweet assignment prohibited them from taking regular notes. I assured students that this was not the case. Surveys are best used mid-semester to leave you time to incorporate student feedback into your lesson plans. As always, reminding students about requirements for assignment is much needed throughout the semester. Here are some more comments: 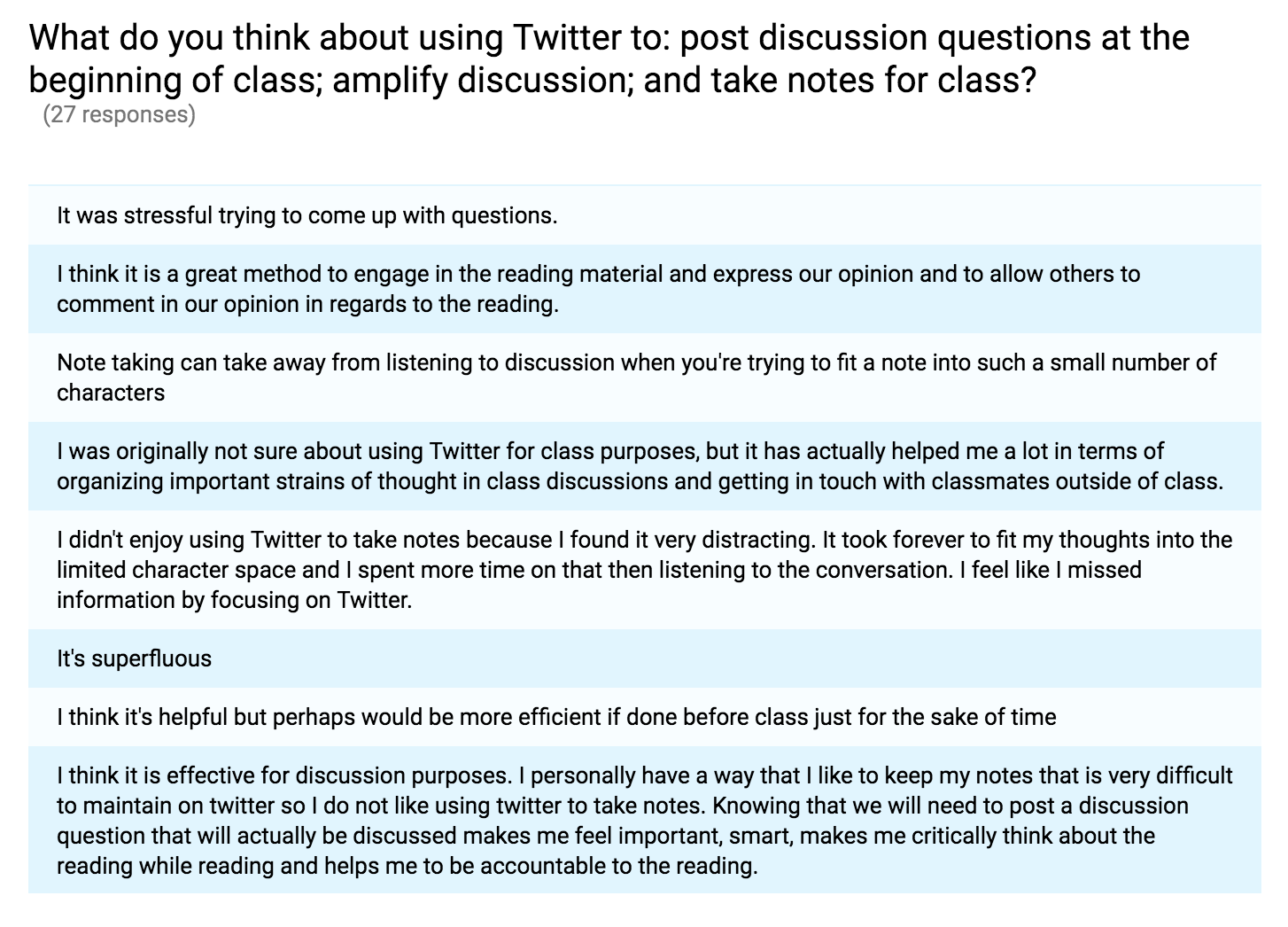 In general, students seemed to feel like their words and opinions were valued in a unique and different way using Twitter compared to a class discussion without an added digital community. Twitter decolonized the classroom, and this was the outcome I wanted. Twitter didn’t stop or stifle class discussion; rather, it enhanced discussion and fostered a sense of community, support, and trust among students and between students and myself.

On the first day students began tweeting (we waited until week two, once everyone in the room had an account and understood how to tweet). I was torn between reading their tweets and engaging them in an in-person discussion. It was strange to be on my phone at the front of the room. Even stranger was that the room was totally silent and that nearly killed me. I got nervous and began to question whether or not this had been a good idea. What did it mean that an entire conversation was happening inside but also outside of the room? Did I actually want that?

It turned out, I did. Twitter provided us a digital community for students to engage with each other in discussions both inside and outside the classroom. In class, I learned to go to questions they posted with the class hashtag. I purposefully chose to read aloud questions posted by quieter students to bring their valuable ideas into the conversation we were having in the classroom. Then, when I went home I would read all of their tweets and respond to them individually. Some students began tweeting responses to the readings using the class hashtag over the weekends. One student posted a funny meme in reaction to a reading, and the ice was broken.

Suddenly, I found myself enthralled with my students clever, nerdy, and on-point reactions to the readings. Their tweets were so smartly funny, so perfectly crafted and creative, and filled with their individual personalities, questions, and values. Once they were put into groups of four to complete a blog assignment together (after which they were required to tweet out posts by their peers and comment and respond to each other) that hilarity entered the classroom. Now I walk in and I can barely get them to stop talking in the first five minutes of class (meanwhile, they’re tweeting discussion questions and reactions to the readings and to tweets written by others in the class). Now, without asking them to do it, they tweet to the class (using the class hashtag) just because, and they echo each other and respond to each other in class (instead of just speaking to me) more frequently than before. This is my goal for every class, and I can usually get us there by the end of the semester (after what feels like pulling teeth for weeks). But with Twitter this happened much, much faster. Of course, the students speak for themselves best: 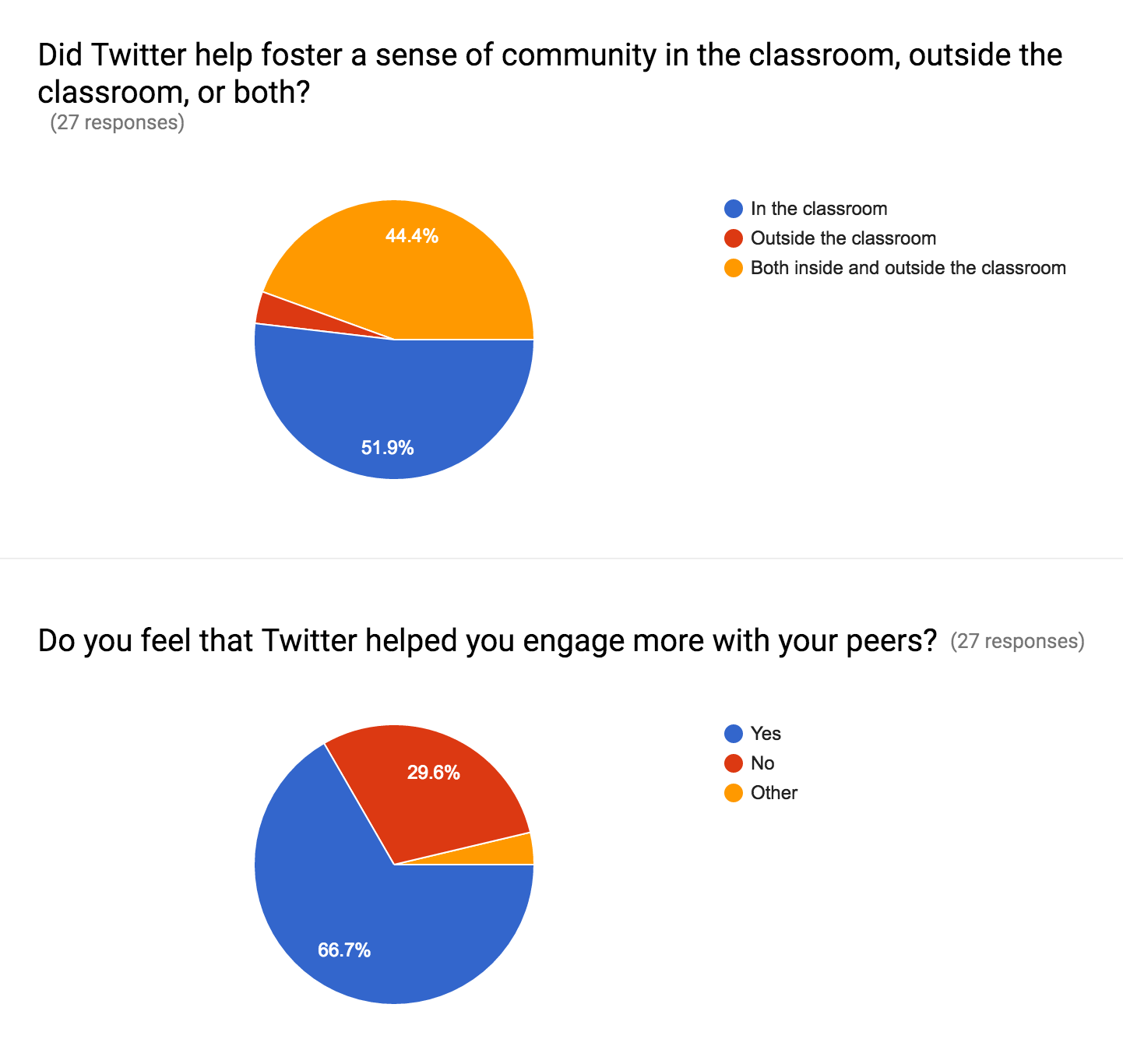 Not to mention, I am utterly delighted to keep up with them on Twitter, respond and re-tweet their questions and notes from class, and I think that makes them feel more valued.

Unexpectedly, students started direct messaging me on Twitter to ask me pressing questions (help understanding a footnote, questions about an assignment, telling me they couldn’t make it to class, etc.). They know that I am available to them outside of class (not too available, yet present and willing to answer questions). They know that when they direct message me it’s like a text message to my phone without me having to give 27 college students my personal number. They use it sparingly. So for me as a teacher, this has been absolutely great. My Twitter feed has never before been this hilarious and interested in the specific texts I work with, and it has never been this easy to keep up with students and be present for them even when I’m off campus.

Finally, attaining the main goal I set out to accomplish with Twitter made me feel that the initial work it took to bring more technology into the classroom was worth it.

Personally, I was already on Twitter, engaged in discussions with other teachers about pedagogy, so this was an easy move for me. I tested out one close reading lesson plan with Twitter the semester beforehand, and did my research over the summer. You should do whatever works best for you, but I’ll let the students answer this one for us. Some prefer a traditional learning environment, while others like Twitter because it makes a class student-driven. I recommend you read them all to the end.

0 Replies to “Building Community in the Classroom with Twitter”

Today's #TeachingMatters workshop features some great books to add to your reading list if you haven't already read them. #TransformCUNY

Celebrating our new @BaruchBls major and welcoming Dr. Keisha Allan to our department!

A collective of 5 @CUNY researchers developed and conducted a survey-based study of how CUNY adjunct and graduate student faculty taught with free of charge materials during the year 2020: https://cuny.manifoldapp.org/projects/the-amount-of-labor-we-do-for-free-and-other-contradictions #phdchat

This is the truth 👇🏻 https://www.insidehighered.com/advice/2022/04/22/burned-out-professor-declares-academic-chapter-11-opinion#.Ym2toblH6Uk.twitter