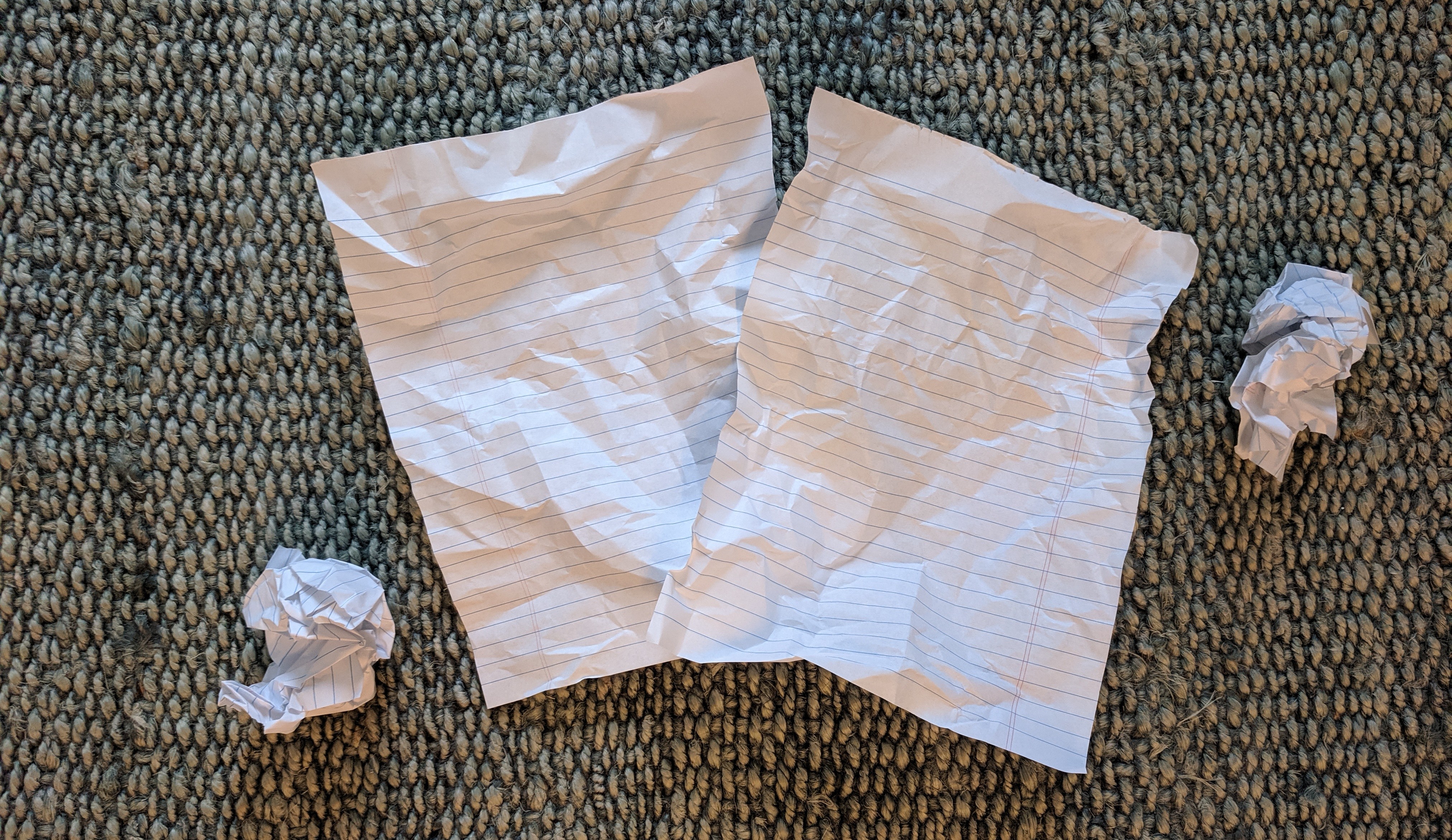 This post is a modified version of “Unfolding Fanny Fern’s Ruth Hall and Nathaniel Hawthorne’s ‘The Birthmark’,” a paper I presented at the American Literature Association conference in Boston, Massachusetts, on May 23, 2019.

To unfold something is to open or unwrap, attempt to undo its folds. However, a fold can’t really be undone: when we unfold paper, there is always a crease left behind; when we unfold cloth a wrinkle is left, reminding us of the fabric’s past; when we unfold the etymologies of words, each root acts as a hinge linking one word to networks of meanings in different languages; and, finally, when we try to explain what a novel, play, poem, or short story means, we literally unfold our books, crack their spines open, and work to unfold their secrets. The literal meaning of explication, the process of analyzing a literary work to explain its meaning, is to unfold (OED).

Today I’m going to talk about an activity I developed for my American literature survey class at Hunter College that involves both literal and analytical unfolding. I am an advocate for close and careful reading—the kind of deliberate explication that acknowledges the creases and wrinkles—marks of where a text has been, where it comes from, and how we come to it, approach it from different standpoints. I also want students to seek and find the hinges between texts—the relationality of writing while immersed in a particular moment in history, and in conversations with other authors, writing and reading one another’s work. Rather than lecture my students with one “right” way to read a text, I have them work through unfolding it themselves, to eventually find through discussion and collaborative learning that a text’s meanings are, in fact, manifold—many and various. I never thought to question close reading, a practice our field is known for and one that my English majors take enormous pleasure in, until I encountered the argument for “distant reading” in the digital humanities.

If you’ll bear with me for a moment, I’d like to position myself in relation to “distant reading,” namely in opposition to it, before explaining the Fold/Unfold activity, and then we’ll have some fun and actually do the activity together.

The Italian literary scholar and founder of the Stanford Literary Lab, Franco Moretti, advocates for what he calls “distant reading”: analyzing literature not by studying individual texts on their own, but by aggregating and assessing massive amounts of data. Moretti’s vision of aggregating big data to perform “distant reading” pretends the subject positions of analysts don’t matter, ignores the human element in data collection and analysis, assumes that who is included in data scraping could be objectively determined, and leaves open the possibility of erasing the subject positions of authors and continuing to marginalize nontraditional voices.

Can we ever be distant from ourselves or our objects of study? No. I would be doing my students a disservice to pretend to be objective and not reveal my cards, my intersectional identities that position me in relation to texts. We know from Donna Haraway’s 1988 essay “Situated Knowledges” that the cyclops of science is never objective, and we have known for some time, as early as Ralph Waldo Emerson, that we should always “suspect our instruments” (see “Experience”). I offer you this extremely brief critique of Moretti’s cyclops assumption to point to debates happening now in digital humanities over the question of close or distant reading, and will refer you to feminist scholars who are doing incredible work unfolding Moretti’s problematic theory. 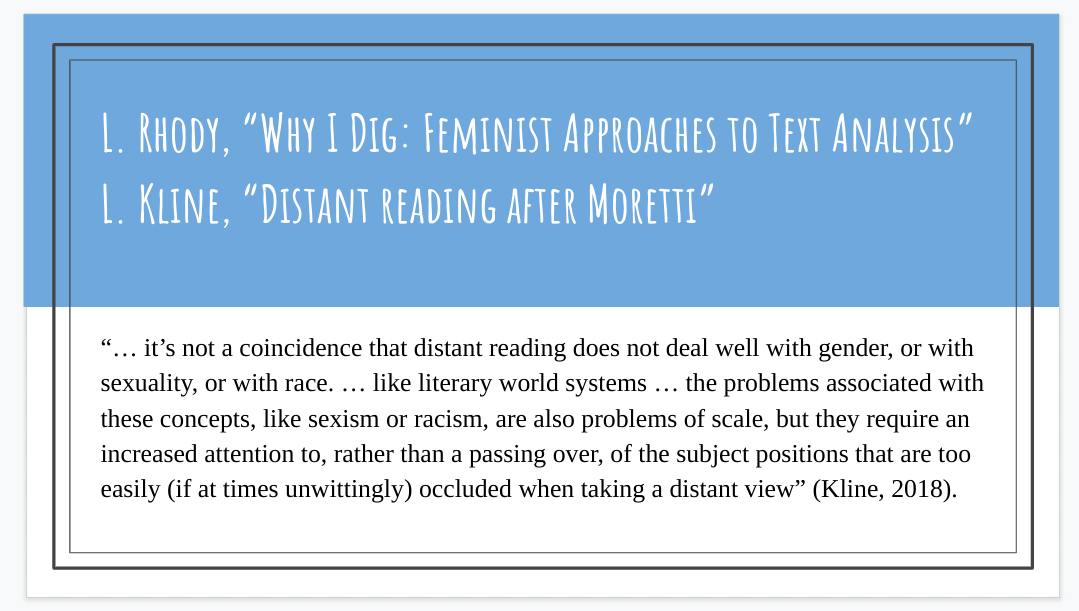 Please read Lisa M. Rhody’s 2016 article, “Why I Dig: Feminist Approaches to Text Analysis,” and Lauren F. Kline’s 2018 MLA paper, “Distant reading after Moretti.” Both pieces are brilliant, point to other theorists working on this, and I love that they are available to read for free online. Briefly, Kline calls for a version of what Haraway advocated for in 1988: situated reading.

To situate Hawthorne, then, in the nineteenth century and in my early American Literature survey course syllabus, means reading him in relation, and treating those relations as a meaningful and productive part of responsible literary analysis. That is why I frequently assign him after reading Fanny Fern’s Ruth Hall. 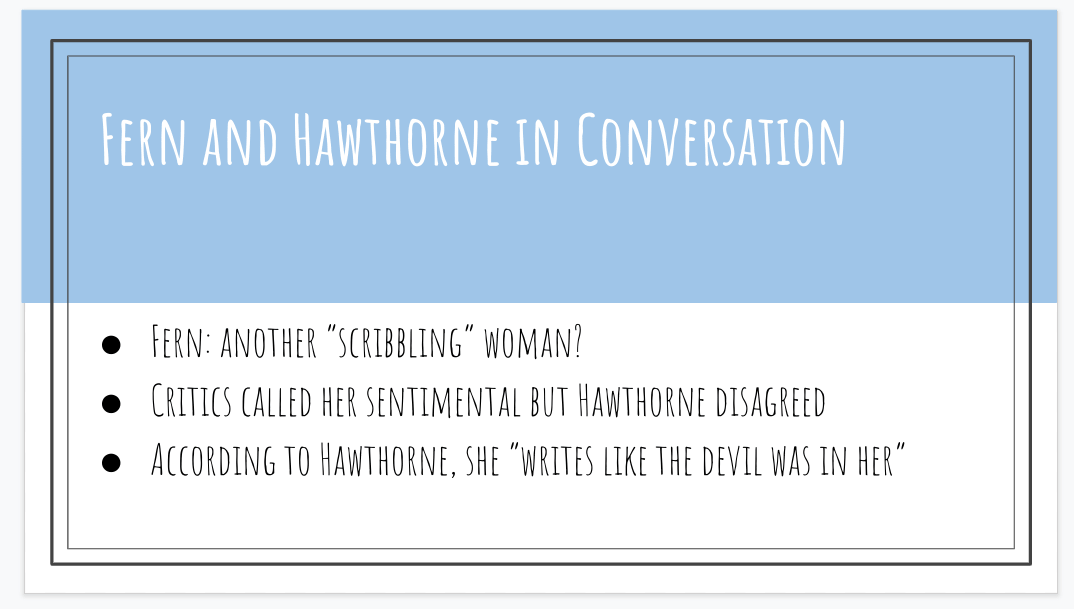 By this point in the semester, my American lit students are eager to know more about women writers and to read their stories, and Fern’s fiery satire scratches their itch for a story about an empowered woman fighting for what is rightfully hers. But to teach Fern alone, without a male counterpart, would be irresponsible. In anticipation of my students’ next question, “how were men writing women in this period?” Hawthorne is either already on the syllabus or he is my answer to their question and students choose to put him on the syllabus if he’s not there already.

“The Birthmark” is where we go next. Students demand a lot from nineteenth-century literature, and I’ll admit that I bait them. I ask: “Would the story end the same way for Georgiana if Fanny Fern had written it instead? What alternative endings would a writer like Fern imagine for Georgiana’s story?” I remind my students that no author is safe from critique, and that includes my personal favorites. Georgiana is no Wonder Woman, and neither is Ruth, but they are noble and brave in her own ways.

When I ruin stories for students by unfolding them and pointing out all the wrinkles, I ruin them all equally. They have desires and subject positions which inform the ways they read, and so I try to bring those out to help us situate ourselves, know our biases as we study the Angel in the House archetype and nineteenth-century laws of coverture, and be responsible readers. We spend a lot of time on minor characters, especially people of color in these stories, and try to be fair to unlikeable characters like Mrs. Hall, acknowledging the circumstances that make them who they are. 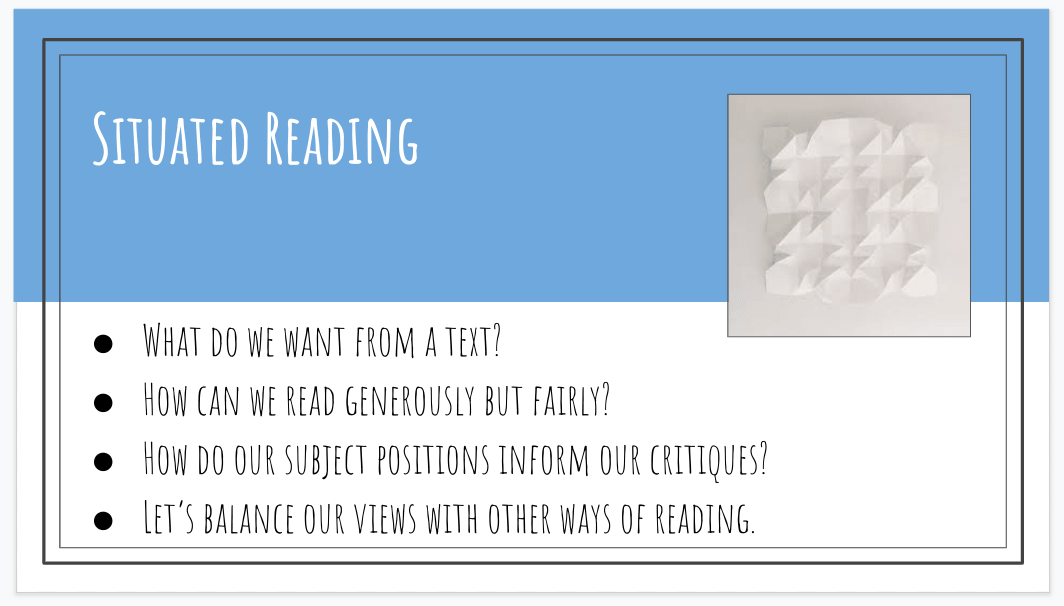 Fold/Unfold is a discussion activity I’ve developed to help students learn how to close read and how to be effective listeners and contributors in class discussion. The exercise is a variation of Think-Pair-Share that works particularly well with “The Birthmark.” Each student receives a sheet of paper with two quotations from the story. I fold the paper so students can only read one of the two quotations at a time. Students first analyze one quotation with a partner, then they unfold their papers and discuss the two quotations together in small groups. Finally, groups report back to the class and share what was discussed. Fold/Unfold works at all levels, from first year composition to American literature courses for majors. This interactive activity empowers students by giving them autonomy—way more autonomy than they would have if I simply lectured at them and they sat passively listening to me—and it requires them to practice close reading skills. Everyone participates, so rather than being satisfied with two or three hands up in the air, I get 100% participation. And it guides students in slow and thorough analysis to warm up at the beginning of class, and it leaves plenty of time for a class-wide discussion. 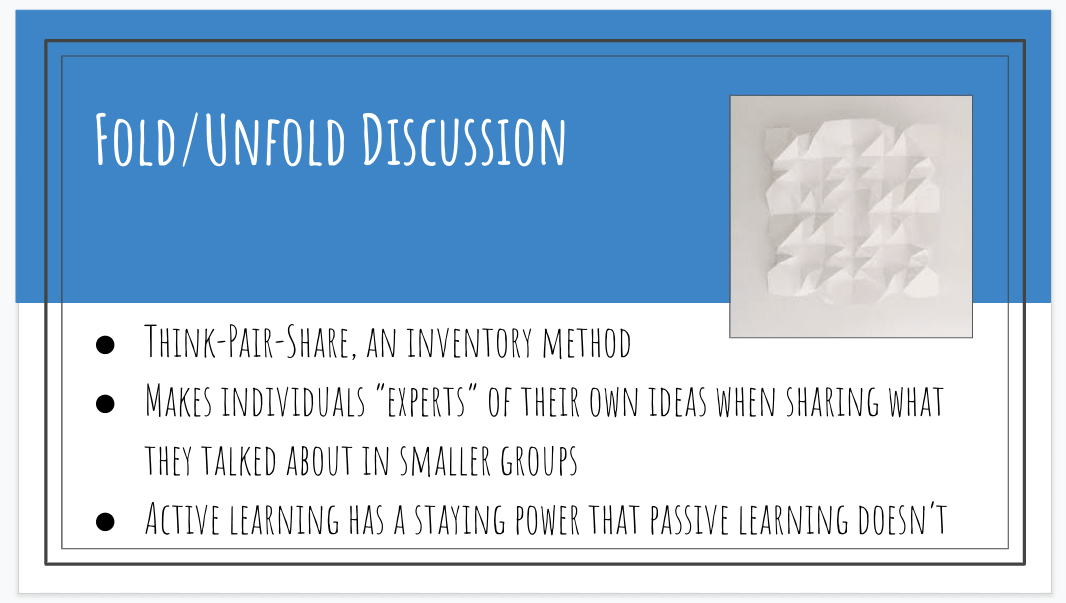 The audience engaged in an activity. I handed out slips of paper. Each slip was folded over and there was a quotation on either side. The audience was broken up into small groups; half of one group discussed one side of their slip, and the other half discussed the other side. After two minutes, I asked groups to unfold their papers and look at the two quotations together, and to share what was discussed in smaller groups. After three minutes, groups reported back to the rest of the audience and I compared answers to what my students came up with when they did this in my class. The discussions were very different. Here is a template for doing this activity with Hawthorne’s “The Birthmark.” 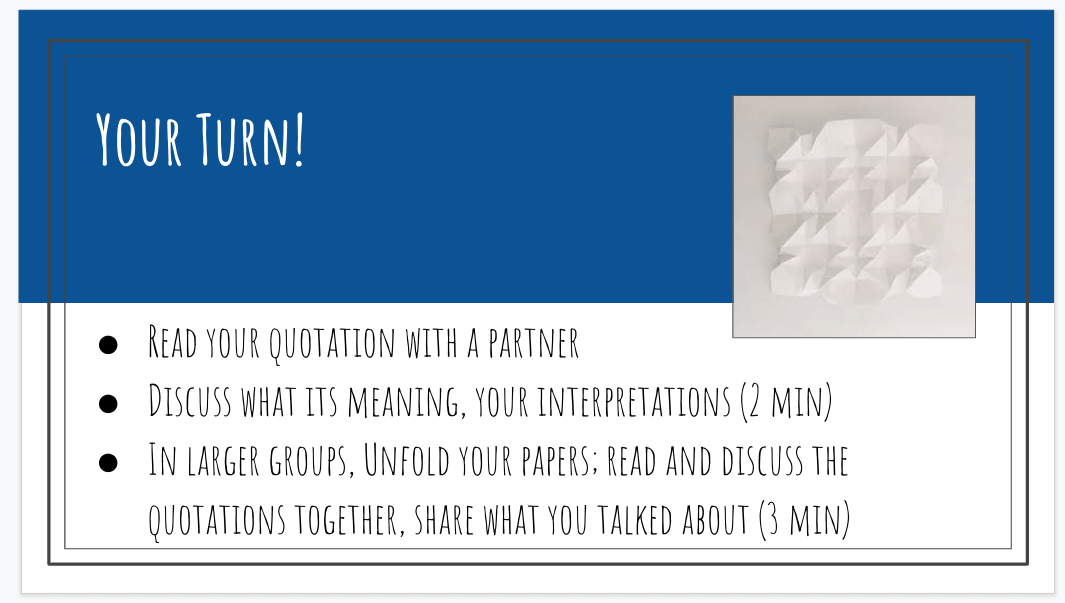 What I love about this activity is it forces students to slow down. To look at one sentence at a time, and try to derive meaning from it, then read the sentences around it to expand their analysis into one that’s more complicated by context, looking slowly at a bigger and bigger picture. This guides them in the process of spinning a theory about a text like a spider web, it makes them pay attention to every detail, every point of contact that complicates, challenges, and strengthens their theses. It’s an activity I remind them about when it comes to writing final papers. And at the end of the semester, students in their feedback remembered Hawthorne and this activity most fondly; it was their favorite class, which made me want to do it more often.

This activity is highly adaptable to any text. If you would like to use it for Hawthorne’s “The Birthmark,” here is my template.