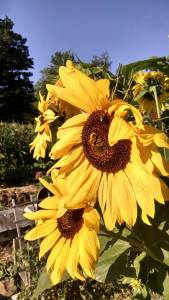 The PDFs have been uploaded to Blackboard, the syllabi have been printed, stapled, and handed out, and names have been learned (well, mostly) as the daunting task of teaching a large survey course is underway this fall. We’re merely scratching the surface at a breakneck pace, reading American literature from the early explorers to the abolitionists, meeting in a long and narrow room for 30+ people twice a week. Trying to keep students engaged and trying to hear from every student in the room in a 75-minute class has already presented its challenges that have required some adjustment on my part, moving away from what I’ve considered a typical English class.

With so much material at hand, and a large amount left out, it’s easy to fall into lecturing or hearing from the same students who are already somewhat familiar with American history. The majority of the class is composed of English majors gaining familiarity with the common practices of the field, but when a great opportunity (e.g. a conversation about Edward Said’s Orientalism when discussing Columbus and Las Casas) comes along, it’s hard to avoid a mini lecture that would bring everyone onto the same page. On the one hand, secondary reading helps to bring class discussion to the next level, but on the other, the syllabus is already packed.
So far the best class-wide participation has come out of group work–something I never did as an English major in college.

The group work (especially in pairs) engages all students, helps to get them more accustomed to talking with one another and responding to each other in class discussion, and keeps the energy in the room going as we cover a breadth of literature in a short period of time. Large class discussions have not done enough to incorporate a large number of students, not to mention a large amount of material, whereas the group work has so far served to produce a more democratic, positive, and student-driven class meeting.

Today's #TeachingMatters workshop features some great books to add to your reading list if you haven't already read them. #TransformCUNY

Celebrating our new @BaruchBls major and welcoming Dr. Keisha Allan to our department!

A collective of 5 @CUNY researchers developed and conducted a survey-based study of how CUNY adjunct and graduate student faculty taught with free of charge materials during the year 2020: https://cuny.manifoldapp.org/projects/the-amount-of-labor-we-do-for-free-and-other-contradictions #phdchat

This is the truth 👇🏻 https://www.insidehighered.com/advice/2022/04/22/burned-out-professor-declares-academic-chapter-11-opinion#.Ym2toblH6Uk.twitter